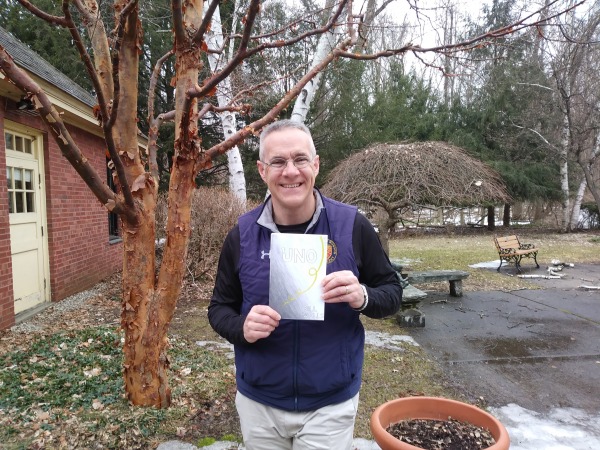 WILBRAHAM – “Uno”, by Bill Wells, a Wilbraham resident, is a book about abusive relationships from the outside, looking in. In the book, a retired man, who has recently lost his wife and best friend, volunteers at a hospital and meets a college-aged woman whom he suspects is being abused. The author writes from personal experience.

In early November 2018, Wells said he got a call that his daughter, who was away at college, had been in a car accident. She had tried to commit suicide by driving into a tree, he said.

After arriving at the psychiatric ward where she was being treated, Wells said he and his wife had sat in on a counseling session with their daughter and were told that her suicide attempt stemmed from her having been in an abusive relationship.

Wells became fascinated by the reasons people stay in abusive relationships and began researching the next day. That night he put an outline together for a book that would become “Uno.”

“When I wasn’t working or running, I was writing,” Wells said.

Wells did a lot of research since he had no prior knowledge of the topic. While he had known someone in high school who had been abused, he said he didn’t see it then.

“Being older, having children, working in a school – I saw it this time,” Wells said.

Wells also ran the book by his daughter several times and made sure the only similarities were the age of Rhaymi Summers, the college student who finds herself in an abusive relationship, and the accident with the tree. While the situation with Wells’s daughter was the inspiration for the book, he wanted to respect her privacy.

“I wanted to bring awareness to this topic,” said Wells. “It became somewhat of a mission.”

Wells stressed that he is not an expert, but he hoped writing the book could do some good.

“I would like to think, for women who have, unfortunately, been involved in abusive relationships, some things I wrote about they can identify with,” Wells said.

Wells reached out to Safe Passage, a Northampton-based non-profit that “provides survivors with the support and information to keep themselves and their children safe and to rebuild their lives in the wake of domestic violence,” states their website. Wells had become familiar with Safe Passage when he wrote a story about their annual Hot Chocolate Run fundraiser for The Republican. He decided to donate 100 percent of the proceeds of the book to the organization. Wells hopes it helps people.

Did Wells find an answer to why people stay in abusive relationships?

“Yes, but it wasn’t satisfying, because it’s sad,” Wells said. “A lot of times the abusive process is gradual and slowly gets worse.” Wells said that many times people forgive their abuser because they remember how it used to be before the abuse.

“In the long run, it allows the abuse to keep happening,” Wells said. He said one of the stories that really impacted him while he was researching was that of a 50-year-old woman who had a Ph.D. and a good job.

“On the surface, this was an intelligent woman. Why would she stay?” Wells asked. “But that’s how manipulative and controlling abuse can be.”

“Uno” is for sale in paperback on Amazon.

More information about Safe Passage can be found at  safepass.org.