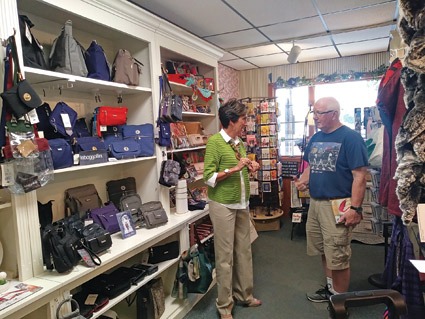 The Scented Garden’s new owner, Sandy Polom, talks with a customer in her shop.
Reminder Publishing photo by Sarah Heinonen

WILBRAHAM – Sandy Polom was never a “mall-type” person. Instead, she preferred shopping for gifts that had a special touch. That’s why she was a frequent patron of The Scented Garden gift shop throughout the 30 years she has lived in Wilbraham.

When owners Michele Axtmann and her husband, Terry, decided to sell the store after 29 years, Polom jumped at the chance to purchase it.

“Sandy and I have worked closely these last few months to make sure this transition goes smoothly,” Axtmann wrote to her customers on the shop’s Facebook page. “I am so grateful to her for keeping The Scented Garden as a Wilbraham landmark.”

Polom had first thought about buying the shop several years ago but said it wasn’t the right time. Years ago, Polom said, she worked on the other side of the supply chain. As a corporate seller, she was the middle man between small businesses and the gift stores that sell handmade items. For the past 24 years, however, Polom has worked in pharmaceutical sales.

She knew running a gift shop would be a change of pace.

“I was very much fascinated with the challenge,” Polom said.

Polom told Reminder Publishing that there is pressure from online retailers cutting into traditional brick and mortar sales, but also noted, “people want to feel and touch gifts.” That personal approach is where Polom thinks The Scented Garden has an edge over the internet shopping experience.

“Anyone can buy something on their phone at midnight,” she said, but the Scented Garden offers knowledgeable staff like Sandy Sotolotto and Lorraine DiNuovo who will help customers pick out the perfect item – and they’ll even gift wrap it.

“They have been so helpful,” Polom said of her two staff members.

Polom also emphasized that the store does its best to sell items made in the United States.

“We obviously cater to a lot of female things, but also things for new couples,” and for the home, Polom said. She is looking forward to adding to the store’s inventory of gifts geared toward men. Polom said she is “listening to customers for what they’re looking for.”

Other changes may be on the horizon, as well.

While Polom doesn’t plan to move locations or change the store name, she said there are aesthetic changes she would like to see, such as an updated decor and logo.

“Packaging and gift wrapping will definitely continue, but maybe it won’t be white and ribbon,” Polom gave as an example of her vision.

Polom said that her focus is on continuing to give Wilbraham residents the “great service and unique gifts” that she enjoyed as a patron of the shop and for which The Scented Garden has become known.