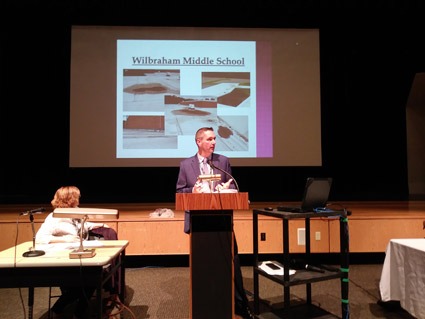 WILBRAHAM – About 60 residents gathered in the auditorium of Minnechaug Regional High School on March 9 for the Wilbraham Special Town Meeting. There were only two articles on the warrant, but each of them required big-ticket expenditures, requiring a two-thirds majority vote.

The town approved Article 1, as described by Hampden-Wilbraham Regional School District (HWRSD)’s Director of Finance, Operations and Human Resources Howard Barber, sought the appropriation of $1,520,939 from the stabilization fund to pay for a portion of the roof at Wilbraham Middle School. Barber explained to residents that the 29-year-old roof at the school has “puddling” and “rotting” due to weather and wear and tear. The finance committee recommended the approval of the article.

Resident Susan Burke asked what would happen if the project was not approved. Barber explained that short-term repairs will continue to be made, which cost $20,000 to $30,000 each school year.

The entire cost of the project is $3,169,773, but the district has secured a reimbursement grant from the Massachusetts School Building Authority (MSBA) to fund $1,648,834 of the project.

This is the second time that MSBA funding for a replacement roof for Wilbraham Middle School has been proposed in the past five years. The appropriation was not approved by the town at that time. If the town had voted it down again, Barber said it was “very unlikely that we’ll get the support we need again.”

Article 2 was also approved. The article asked for approval to borrow $135,000 for a portion of the purchase of two electric highway dump trucks. Tanya Basch, director of the Department of Public Works said that the total cost of the vehicles is $426,000, but the town is not required to fund the entirety as it has received grant money from the state’s settlement with the automotive company Volkswagon over its 2015 emissions scandal. The trucks that are being replaced were scheduled to be retired.

Select Board Chair Sue Bunnell made an unexpected announcement at the beginning of the meeting that she will not seek re-election in May. Bunnell took a job with the U.S. Bureau of Labor Statistics in the fall and, as a federal employee in the executive branch, is barred from holding a partisan political office under the Hatch Act.

Bunnell will serve out the remainder of her term. She later told Reminder Publishing that she has been “struggling to figure out a way to circumvent it, but there isn’t one.” She has served on various boards in Wilbraham since 1991 and said that she had given serious thought to leaving her job in order to stay in the town government.