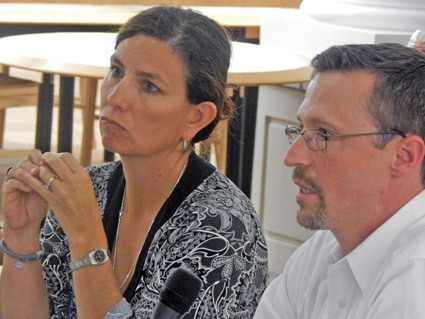 WILBRAHAM – Members of the Middle School Task Force (MSTF) delivered the group’s recommendations to the School Committee at its Oct. 13 meeting that Wilbraham Middle School (WMS) should become the location for a single unified middle school.

A long-term approach focuses on the district partnering with the Massachusetts School Building Authority (MSBA) to renovate the existing building or create a new one that “supports the educational, social, and emotional needs of the children of Hampden and Wilbraham,” she added.

“I think there is a real feel that there is a short-term [goal] that needs to be addressed as soon as possible,” he explained. “There may be some changes in school curriculum programs. I think that we’re not giving the students the best program possible.”

School Committee member William Bontempi asked the co-chairs whether they would pursue building a new school with the MSBA.

Sheehan responded by stating there has yet to be a consensus on this issue, but its ultimately up to the MSBA to help the district determine the best path forward.

“I think they need to do an assessment of the facility and then make a determination whether it makes sense to renovate it or [build a new school],” she added.

School Committee member Mike Mazzuca asked if the MSTF has examined whether TWB students bused to WMS would be on the bus for an “extreme amount of time” or if there would be any other additional impacts.

O’Brien said there are several options on the table right now to address this issue, such as utilizing additional buses.

Mazzuca also asked what the implications are for the social-emotional impacts of TWB students moving to WMS.

“The feedback we had gotten is that there wouldn’t be much of a change for them,” O’Brien explained. “At that age range, especially earlier ages, they really haven’t formed that kind of real connection and that allegiance to one town or another. It did not seem as though it would be as significant as the parents would feel it would be to the children. The children would be a lot more resilient making a transition like that.”

School Committee Chair Peter Salerno said one major issue is whether voters from Hampden and Wilbraham would allow the regional agreement to be amended in order to create a consolidated middle school at WMS.

“I think it’s important as us as a group to take this seriously because I think that the work that you have done has been outstanding in terms of its depth and its implications,” he added. “I now think we have to have communication to our towns.”

He explained that the district know has to gain an understanding about how much residents know about the plan to amend the regional agreement and the middle school issue.

Superintendent of Schools M. Martin O’Shea said the MSTF would begin working to develop a survey for residents regarding the issue at its Oct. 15 meeting.

Although the School Committee did not vote on accepting MSTF’s recommendation during the meeting, Salerno noted that it is “in the best interest” for the committee.