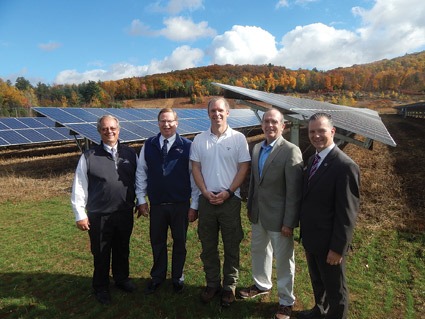 The electricity provided by the solar system will be sent to National Grid and the net metering credits produced by the system are then sold to East Longmeadow and Belchertown, Managing Partner of Altus Power America Lars Norell said.

He added that Altus Power, based out of Greenwich, CT, began six years ago with a mission to generate clean energy similar to systems in Europe. The company is partly funded by GSO/Blackstone, which invests in, owns, and manages clean energy projects.

“Since then, we’ve grown to be a much bigger company, and this is the biggest system we’ve ever built,” he noted.

“About a year and a half ago, the town of East Longmeadow [bid] to purchase about 60 percent of the net metering credits that are generated by this whole facility,” he added.

“That 60 percent amounts to about 3.7 megawatts of power per year,” he continued. “By purchasing the credits that are generated from this facility, we’re able to purchase those credits at a 20 percent discount, so we essentially receive $1 worth of credit that costs us 80 cents,” he continued. “That 20 cents gets applied directly to our utility bill for every dollar that we spend to purchase power.”

Over time, East Longmeadow’s expectation is that the credits purchased from Altus Power would “more or less equal” bills paid to utility company, Peirent said.

Norell said the contracts with the two communities are for 25 years.

“Twenty-five years is a length of time you hear a lot of in the solar industry because the solar panels are warranted to last that long at least,” he explained.

Alana Chain, Altus’ senior construction manager for the project, said it took about four months to develop the solar array on the property – from mid-November 2014 to February.

“We were running plows starting at 3 a.m. so guys could get in and out of the rows easily,” she noted.

Norell compared the project to a “multi-dimensional puzzle,” stating that Altus Power needed to work with the landowners, the town of Hampden, the communities buying the net metering credits, National Grid, the builders and suppliers, as well as the Massachusetts Department of Energy Resources and the Internal Revenue Service to gain complete the project and receive investment tax credit.

He added the lease for the 19-acre property with landowners Jim and Dorothy Kibbe is for 30 years.

Hampden Selectman John Flynn said Altus was very responsive to the concerns of abutters during the planning and construction phases.

Altus Power received a special permit from the Planning Board in order to start the project, he noted.

“For something like this to happen, so many good things have to fall into place,” he added. “It’s very easy for something like this not to happen. I’m thrilled that everybody worked together and to see this come to fruition. This is a great thing, not only for the two towns connected here, but this is good for Western [Massachusetts]; this is good for the entire Commonwealth.”

According to a press release from Altus Power, the solar system generates enough power to operate 352 homes per year and prevents carbon dioxide emissions equivalent to 433,700 gallons of gasoline consumed per year.

Flynn said the town hopes to build a six megawatt solar array on 40 to 50 acres of the Hampden landfill off of Scantic Road. A bid was recently awarded to Framingham-based energy company Ameresco.

“There’s probably 40 communities in Massachusetts that already have solar on their cap landfills,” he added. “It’s a common use.”