No middle school merger for HWRSD 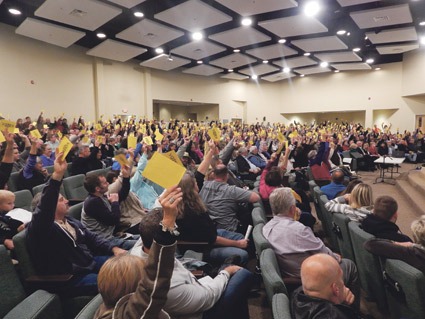 HAMPDEN & WILBRAHAM – The question facing the parents of middle school aged children in Hampden and Wilbraham is “What’s next?”

While Wilbraham voters overwhelmingly approved the measure to merge the two existing middle schools into one unified school, Hampden residents rejected the proposal by a large majority.

The warrant articles in both communities called for an amendment to the regional agreement that would have allowed students from Thornton W. Burgess (TWB) Middle School to attend Wilbraham Middle School (WMS). The Middle School Task Force (MSTF) explored the issue of solving the district’s ongoing decline in enrollment for more than two years. It recommended the merger to the School Committee as a temporary solution to combat the enrollment decline. The committee unanimously endorsed the idea. As a result of the unification the district would have closed TWB for a five-year period.

Superintendent of Schools Albert Ganem Jr. told Reminder Publications after the vote he was “disappointed in what took place.”

He added, “We’re a district. We’re not separate. We kept talking about Hampden and Wilbraham, but we are regional school district. There’s not two separate entities there. We’re together … I just hope the same group of people are going to be working with us now because of where we’re at now and what we’re looking at for TWB. I’m truly hoping that they’re going to be able to work with us because we’re going to be in a tough situation.”

Previously, Ganem spoke at an informational session on Oct. 18 in which he detailed what would happen at TWB if unification failed. During the next school year, TWB would not offer the first part of Algebra I as a standalone course, half of the school’s 16 teachers would be reduced to part-time status, a portion of the building would be closed, and the school’s estimated enrollment would be approximately 159 students in grades 6 to 8. Grade 5 students would be moved to Green Meadows Elementary School at the start of the 2017-2018 school year.

When asked how the district would handle a potential influx of TWB students deciding to attend WMS instead, Ganem replied, “Again, we have to look at the regional agreement. We have to get some legal counsel on that. But just think about that. If we have even 25 or 30 kids that want to leave TWB and go to Wilbraham Middle that’s going to leave us in a more precarious situation at TWB than we already are. We’re going to have fewer students. And I’ve got to tell you – just alone tonight people have already asked me right now if they can do that.”

TWB Principal Amy Bostian said she is concerned about the impacts to students next year as a result of the failed unification.

“This year it’s already presenting a problem,” she explained. “You can see the correlation between our [Massachusetts Comprehensive Assessment System] data and the way that we’ve had to really redesign our programming. Mr. Ganem talked about the teaming model and that’s absolutely the best way to approach middle level students. A woman from town said, ‘We’re doing that at TWB.’ We’re barely doing that at TWB. We don’t have common planning time every day for all our teachers. We don’t have the time in our schedule to look at student data and look holistically and make those really good decisions for kids. My school is full of really wonderful people and teachers who are killing themselves.”

She added the school has already lost positions, including an assistant principal and guidance counselor due to the decline in enrollment.

“I wouldn’t say any of the cuts have been extreme,” Bostian said. “They’ve all been necessary and reasonable. We have lost an art teacher. That is a big loss because we talked about having lots of experiences for middle school students. Unfortunately, we’re relying heavily on volunteers and the goodness of people’s hearts and that’s just not sustainable.

She said she anticipates some teachers would leave the district for other jobs in the near future.

“We’ll have people going down to part-time that can’t sustain part-time employment, nor should they,” Bostian noted.

School Committee Chair Lisa Morace said she’s unsure when middle school unification could be brought back to voters in the future.

“We might have to bring it differently and now that this is happened we don’t know if the [Massachusetts School Building Authority] (MSBA) will even partner with us at this point because we don’t have a unified approach to this issue.”

The MSBA typically reimburses school building projects at a rate of 50 percent or more to qualifying districts. Hundreds of statements of interests to examine potential projects are submitted to the MSBA on an annual basis, but only a handful is chosen each year throughout the Commonwealth.

Ganem said the first thing the MSBA requested was that he informs the organization the result of the unification issue.

“The MSBA wanted to know if we didn’t unify because for them to be able to work with us they want to see that the community’s unified and the community’s working together,” he noted. “The one thing the MSBA said over and over was, ‘We’re looking for a community that works together.’”

Opponents and proponents were each given 16 minutes prior to the vote to speak about the article during the Hampden meeting at Bethlehem Baptist Church, at which more than 700 people were in attendance. The church’s main sanctuary and gymnasium were nearly filled to capacity.

The lead opponent was Hampden resident Maryellen Glover, a town resident for more than 65 years, a former School Committee member, and an educator with 40 years of experience in Connecticut.

“I can tell you that quality education is not about money, it is not about school buildings, and it is not about building a middle school scheduling model,” she explained. “It is about great dedicated teachers working in a positive environment with parents who value education and children who are eager to learn. Thornton Burgess has those teachers, that environment, those parents, and students who enthusiastically embrace education.”

Glover said in 1878 Hampden formed its own town, splitting from Wilbraham because “we wanted to control our own destiny over issues just like this one.”

She added, “Have we learned nothing from the past? This merge will give total control over education to a committee on which we have a minority status. The present amendment vote will be the only time when the will of Wilbraham and the will of Hampden will be equal.”

She noted the School Committee is composed of five Wilbraham members and two from Hampden.

Glover said she believes the district has yet to live up to promises made by the K-8 regional agreement for Hampden students.

The state promised 100 percent reimbursement for busing as part of the creation of the regional school district, she said. The state has funded the district well below the full amount in recent years.

“Additionally, the regional school district, as stated in the original agreement, promised budget savings, equity of education between all schools, and the guarantee that K-8 student would be educated in their home towns,” Glover stated. “The first three of these promises have already been broken.”

After the vote in Hampden took place, audience members in the main sanctuary erupted into applause.

The auditorium of Minnechaug Regional High School was standing room only for the Wilbraham Special Town Meeting. The Wilbraham warrant had three items, the first two described as “housecleaning” were passed quickly.

The issue of the merger elicited only two residents asking questions after a presentation by school officials and no one electing to speak either in favor or in opposition to it. Moderator George Reich called for the vote and the meeting was concluded within an hour.

In Hampden, many residents spoke, most of whom voiced their opposition to unification.