Peach Blossom Festival gets back to predecessor’s roots 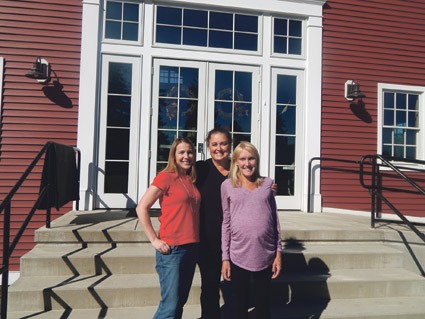 Wilbraham Peach Blossom Festival organizers (left to right) Emilie Hisgen, Jennifer Powell, and Amy Smith stand in front of the red barn at Fountain Park. The festival is slated to take place at the park on June 17, 2017.
Reminder Publications photo by Chris Goudreau

WILBRAHAM – A town tradition will be returning to its roots as the Wilbraham Peach Blossom Festival makes its debut on June 17, 2017 at Fountain Park.

The Wilbraham Peach Festival was an annual event in town for 25 years before it ended in 2010.

Jennifer Powell, a member of the Wilbraham Peach Blossom Festival Association, told Reminder Publications the Wilbraham Community Association used to organize the Peach Festival and has given the new festival inspired by the original one its blessing.

“We’re just approaching this completely fresh,” she added. “We listened to the pitfalls of the last one by listening to all the other directors from past Peach Festivals … They ran into trouble finding volunteers, so that was the first thing we did – we decided to have it on a date where more people are in town. It was always at the end of August. So we thought, ‘Let’s do it at the end of the school year.’”

Powell said the festival would be small and community driven compared to the multi-day large event that the Peach Festival was during its last years. The original Peach Festival started as a much smaller event and the association hopes to harken back to the original festival’s roots.

“It’s a small town festival and it’s driven by the people in town,” she explained. “So, if it doesn’t happen it’s because somebody didn’t do it. It’s not because we didn’t pay somebody to do it. It’s because there wasn’t an interest from somebody to make it happen.”

Powell said the association is planning on utilizing several venues at Fountain Park, such as a local history exhibit at the red barn, located at park entrance.

“If you’ve got an old school uniform or you’ve got wedding photos in front of a church that doesn’t exist anymore, bring your photos in and we’ll have a place for them [to be displayed,]” she noted.

Another event to be featured at the festival is called “Talent from Town.”

"You can submit what you do that’s your hobby; that makes you interesting,” she said, adding the event is open to any type of talent such as artwork, baking, and inventions.

All the events at the festival would also help raise funds for local Wilbraham organizations, she noted.

Another event at the Peach Blossom Festival is a food festival, which pairs restaurants and food professionals with organizations that need to raise money, Powell said.

“We’re going to say, for instance, to the [Wilbraham-Hampden] Rotary Club, ‘You need to make money for your scholarship fund, let’s pair you with Neighborhood Pizza and whatever money you take in – that’s your fundraiser,’” she explained.

Festival organizers have yet to speak formally with town officials about the festival and would seek additional special permits for the one-day event, Powell said.

“We have the full support of the Wilbraham Nature and Cultural Preserve and we’re hoping next year to grow it and expand it, to maybe two days, but we really want to start small and get people involved and get it right,” Amy Smith, another member of the festival’s association, said.