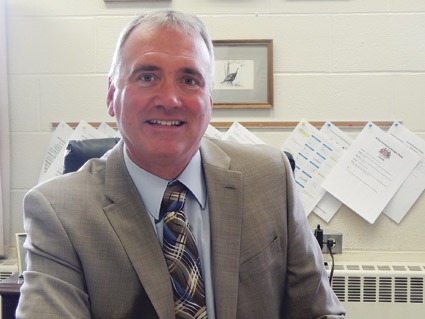 Wilbraham Middle School Principal Noel Pixley reflected on 20 years of being a middle school principal in the Hampden-Wilbraham Regional School District. He is set to retire sometime before the end of the year or early January 2017.
Reminder Publications photo by Chris Goudreau

WILBRAHAM – Wilbraham Middle School (WMS) Principal Noel Pixley, who has been a middle school principal in the Hampden-Wilbraham Regional School District (HWRSD) for 20 years and plans to retire this year, told Reminder Publications leaving the district would be a “bittersweet moment.”

He said, “It’s been an unbelievably rewarding career … I was thinking that people in life find a job and they do a job and some people find a career and a passion. I really feel lucky in the sense that something that started off as my passion ended up being my career that I have absolutely loved every minute of. I feel like it was my calling.”

Pixley, 56, who began working as a principal at Thornton W. Burgess Middle School (TWB) in 1996 and became principal of WMS three years ago, said he initially was a high school teacher, but decided to take a job at the middle school level, which led to his career path.

“The age of the kids, the enthusiasm they have, all of that just was a huge hook for me,” he added. “That’s what kind of got me into the middle school mindset.”

Pixley said he believes the teaching staff is one of WMS’ strengths.

“They’re a phenomenal group of teachers,” he noted. “They work hard, they’re committed, they do a phenomenal job with the kids.”

He said he believes the district’s curriculum at the middle school level pushes students to expand their knowledge.

“I think when you take a look at our graduation rates from Minnechaug [Regional High School] and you see the kind of colleges where our kids end up [you’d see] that this district does a really nice job preparing kids for their future,” he added.

Pixley also spoke about areas of improvement for the both WMS and TWB, namely the proposed idea to create a unified middle school.

“I am a huge proponent of putting the two schools together,” he noted. “It just makes sense from every single angle. I think socially, the kids from both communities already somewhat know each other through sports and other activities outside of school. I think having them all together as one [student body] would be a phenomenal opportunity for everybody.”

He added a unified middle school would also allow the better utilization of financial resources, which are now being stretched across the two buildings.

Pixley also offered words of advice to his successor Peter Dufresne, who currently serves as principal of TWB.

“I would tell Mr. Dufresne to be himself because he is certainly a competent principal

Pixley said he’s not the kind of person who likes to sit idle and hopes to work as an adjunct professor working with student teachers – his dream job.

“I would really enjoy that a lot – helping new upcoming educators defining what their skill is,” he added.

He said he would also like to work with the Massachusetts Secondary School Administrators Association – a professional development organization for principals and assistant principals.

Pixley, who was a student at TWB and graduated from Minnechaug, said he feels “blessed” to have worked in the district.

“The ultimate compliment is when you read something about yourself that you’ve influenced somebody and in a number of situations throughout my career I’ve either read articles about kids or I’ve had people come to me and say how I’ve influenced their direction in life and it is the ultimate reward,” he noted.

Pixley said Dufresne would take over as WMS’ principal before the start of the 2016-2017 school year. Pixley is set to return to TWB to mentor Amy Bostian, who will serve as TWB’s new principal. Bostian currently serves as a half-time assistant principal at TWB.

He added he would retire either at the end of the year or early January 2017.