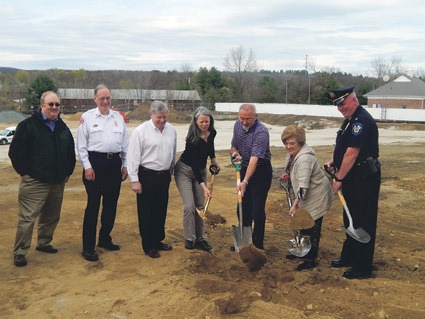 WILBRAHAM – Wilbraham elected officials, members of the Police Department, and residents celebrated the official groundbreaking of the $8 million new police station at 2780 Boston Road on April 25.

Police Chief Roger Tucker told Reminder Publications after the ceremony the police station would be completed by March 31, 2017 and construction began about three weeks ago.

“I’m very excited to see this begin,” he explained. “I’ve been a Wilbraham police officer for 29 1/2 years and at the end of my career I get to experience what it’s like to be in a new facility. It’s going to be 21st century. It’s going to have all the features in it that a modern police station should have and we’re looking forward to it.”

Selectman Robert Russell said about 25 years ago the town looked into the possibility of creating a joint public safety complex and he considers the creation of the new police station next door to the fire station a realization of that idea.

“It’s going to have a good presence here on Boston Road, where it’s very visible and it’s going to serve a lot of purposes for the town,” he added.