Polish Miss Massachusetts reflects on win and move to the U.S. 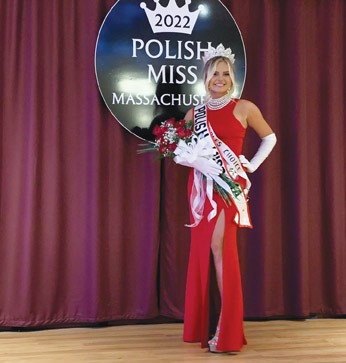 HAMPDEN – Paulina Wysocka is originally from a small northeast town in Poland. She moved to Hampden with her family when she was 13. On Aug. 14, Wysocka was crowned 2022 Polish Miss Massachusetts.

According to Wysocka, her family relocated to the United States because her parents wanted a better life for her and her sisters. After arriving in Hampden, Wysocka attended Thornton W. Burgess Middle School (TWB), Minnechaug and Western New England University (WNE).

Wysocka spoke no English when she came to the United States. She said that it was a tough adjustment for her at first.

“The beginning was really tough. I wanted to go back every single day when I didn’t speak English because I’d just sit in class and completely not understand anything that was going on. It took me a good few months to be able to actually pick up what was going on in class and not bring my dictionary every day and not have to translate every single assignment word for word,” said Wysocka. “Seventh grade was tough. After summer I was kind of like, alright, I’m getting the idea of what English is.”

During her time at WNE, Wysocka studied marketing communications and advertising and completed two minors in International Business and Economics. She completed her international business minor in France.

“I always liked marketing because I like the creative side of it. International business and economics, I was hoping that maybe one day I could work in a place where I could be moving back and forth from America to Poland,” said Wysocka.

Wysocka said that she loves living in the United States, but has many family members still in Poland and would love to be able to visit more often.

“I don’t think I could move back for sure to Poland, but I would love to be able to go back there very often. I don’t mind travel, I love travelling, and I love Poland, so that would be the ideal,” she said.

After graduating in 2019, Wysocka began working for United Way of Pioneer Valley. She is the resource development associate and works on special events, volunteer coordinating, social media and is the director of the Chicopee Cupboard food pantry.

In August, Wysocka competed in and won the Polish Miss Massachusetts contest. She said that she did it for her grandma.

“My grandma told me to enter. It was my grandma’s biggest dream, so I said alright, I’ll do it for grandma if it was going to make her happy. I’ll do anything for her,” said Wysocka.

According to Wysocka, her win was unexpected. She will now be moving on to compete in the Miss Polonia USA competition in October.

“I never thought I would compete in Polish Miss Massachusetts, so that is the biggest shock going on with my life right now. It’s just not my thing and it’s really out of my comfort zone. I don’t really like public speaking and doing things like that, but I’m very grateful that I did it,” said Wysocka. “It opened up a lot of opportunities for me and I’ve met a lot of great people that are Polish and not Polish and, you know, it’s just like something that I would never expect to open so many doors for me in a way.”

Wysocka said that she will now be going to many Polish festivals, parades and meeting new Polish groups and clubs. She said that she is excited to be getting more involved with the Polish community in Western Mass.

“I’m very happy my grandma told me to do it because my year looks like it's going to be a very exciting one,” said Wysocka.