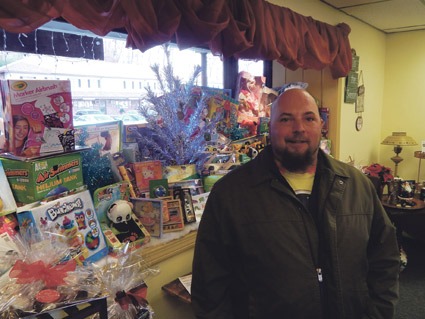 Jeff Wingate, owner of Pop’s Biscotti & Chocolates, poses next to more than 200 toys that are currently on display in the shop’s front window. The toys are being collected for a local Toys for Tots campaign.
Reminder Publications photo by Chris Goudreau

WILBRAHAM – More than 200 toys have been donated at Pop’s Biscotti & Chocolates at 2341 Boston Road, which is collecting donations for Toys for Tots until the end of this week.

Jeff Wingate, owner of Pop’s Biscotti & Chocolates, told Reminder Publications individuals receive a raffle ticket for every toy they donate. The winner receives a gift certificate good for a year’s worth of chocolate.

He added one person would win the gift certificate, which consists of $20 of store credit per month during 2017.

“We wanted to do that so people would be motivated to bring more than just one toy,” Wingate explained. “We had someone bring in 18. We had a gentleman bring in 20. So, it’s a good motivator.”

This is fourth year Jeff and his wife and co-owner Maria Ferraro Wingate have collected toy donations, he said.

“Every year we seem to get more and more,” he added.

The couple is collaborating with the Western Massachusetts chapter of Toys for Tots for the collection and Wingate said the toys would be donated to children in the local area during the holiday season.

“The first year when people found out about the year of chocolate when [Toys for Tots] came to pick up the toys, they were surprised we had that many because we’re such a small shop, but they had given us one box and we filled three,” Jeff Wingate explained. “This year we’re probably going to fill four or five boxes probably.”

Donated toys are currently on display in the front window of the shop. Anyone interested in dropping off toy donations could do anytime during the hours the store is open, he added.

The mission of the U.S. Marine Corps Reserve Toys for Tots program is to collect new and unwrapped toys during the months of October, November, and December each year and to give those toys to less fortunate children in the community in which campaigns are conducted.

For more information about Toys for Tots visit www.toysfortots.org and to find out more about Pop’s Biscotti & Chocolates visit www.popschocolates.com.