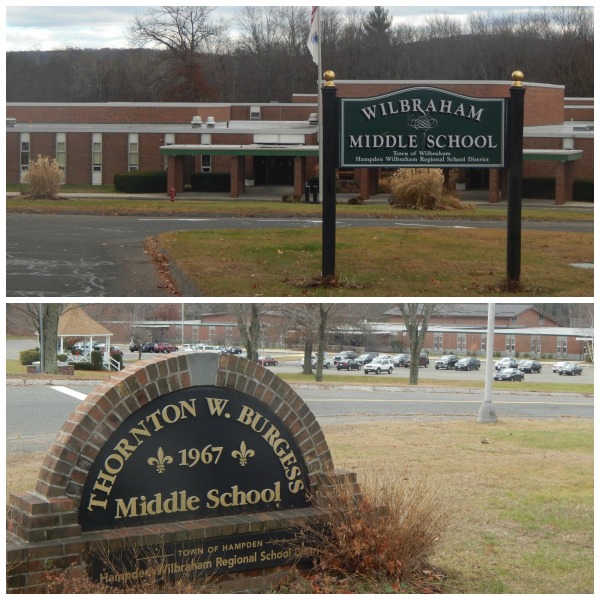 WILBRAHAM – Superintendent of Schools M. Martin O’Shea believes the district’s budget shortfall crises during the past several years could be solved by creating a single unified middle school.

“This would contain our costs significantly,” O’Shea told Reminder Publications.

The Hampden-Wilbraham Regional School District (HWRSD) faced a $1.3 million budget shortfall during the fiscal year 2016 (FY16) budget process, which was shrunk down to $1 million. Twelve full-time equivalent (FTE) teaching positions were cut as a result of the budgetary shortfall.

O’Shea said if a single middle school was approved, staffing cuts would also be likely, but would save the district money in the long term and improve class offerings for students.

Thornton W. Burgess (TWB) and Wilbraham Middle School (WMS) have already felt the impacts of the ongoing decline in enrollment at the middle school level.

TWB Principal Peter Dufresne said his school has been most impacted by the decline in enrollment at this point.

“There’s been two big impacts,” he explained. “One, I would say is the sacrifice of the middle school model in its purest form. In a true middle school model teachers have prep time, team time, time to talk with students, time to talk about students, plan thematic units [and] bring students in front of the team if they’re struggling. That is gone.”

He continued, “And then the specials areas have been impacted because we don’t have necessarily have the number of students to run a broad rich offering across the board.”

Dufresne said TWB doesn’t have full teams of teachers due to not having enough students enrolled in special programs.

“Core instructional programming is going to be severely impacted and it already has begun,” he added. “I have 77 students in the eighth grade. That is the last sort of big class going out of [TWB]. After that it drops to 60, 51, and my incoming class is 42 [students]. Next year, I will be making the decisions on which level of course am I not going to offer in a meaningful way. That’s a rotten decision.”

O’Shea said if the schools offered more special classes such as art, music and other electives, the classrooms would not be adequately equipped, furnished and staffed to the level that he believes they should be.

“When you stretch out [programs] between two buildings, we can offer a computer info tech class in both building, but is that the richest experience that we can give a kid? If we offered it in one building it would be a much richer experience for kids because we would be able to make the investments in the single facility. Imagine more mobile computing. Imagine a more wireless environment.”

WMS Principal Noel Pixley said if the decline in enrollment were to continue at a profound rate his school would be in a similar situation to TWB.

“Eventually it’s going to start to really impact what we can offer and can we really truly offer middle school programming that we know is good for kids,” he noted.

Pixley said this year the decline in enrollment has been the most notable.

“Up to this point, we were able to maintain two teams per grade level,” he added. “We had six full teaching teams. When I say full, what I mean by that is, they have a full host of subjects within that team … This year our enrolment has dropped to a point where we didn’t have enough students in two out of the three grade levels to sustain full teaching teams. That became somewhat of a struggle for us because you don’t want to have class sizes that are only 15 or 16 kids. That’s not really an efficient model as far as budgetary concerns.”

The school adopted a “cross grade level experience,” in which students in seventh and eighth grades were on teams together, Pixley said.

“[Seventh and eighth graders] don’t intermingle within the classes,” he noted. “The challenge there for the teachers is this year they had to learn another grade level curriculum where in the past they were only responsible to teach the one grade level specifically.”

If the two middle schools were combined, the resources for both schools could be enhanced to offer programs such as a 3D print shop, Pixley said.

“We’re trying to get the kids ready for a global market place and trying to make sure that their competitive in a global society,” he added.

Both schools were also constructed in the late 1960s and there are limitations to the buildings, O’Shea said.

“The design of Wilbraham Middle School for when it was built was an appropriate design,” Pixley said. “Now we’re trying to put kids into classroom spaces that were intended for much different purposes. In some cases we have classrooms that are way too big and we have other classrooms that are not big enough.”

Pixley, who previously served as TWB’s principal, said the school was built to house grades 4 through 8.

The district is also finding ways to inform residents about the decline in enrollment and the proposed single middle school prior to a potential vote in 2016 in both communities to amend a regional agreement between Hampden and Wilbraham, which would allow for a unified middle school.

O’Shea said an informational brochure would be mailed to every home in the two communities sometime in mid-December. The brochure can be viewed online by visiting www.hwrsd.org/files/_LDHYh_/aa18d907b7aa38923745a49013852ec4/Middle_School_Unification_Brochure_.pdf.

A survey would also be distributed by the Middle School Task Force in order to gather community feedback on the issue, he noted.

In addition, a public information session is slated for Jan. 7, 2016 in the Minnechaug Regional High School auditorium at 6:30 p.m. Community members of Hampden and Wilbraham are invited to hear form teachers, administrators and members of the Middle School Task Force on educational opportunities that could be provided in a unified middle school. Public feedback and questions will be welcomed at this event.