Residents of color share their stories of racism in Wilbraham 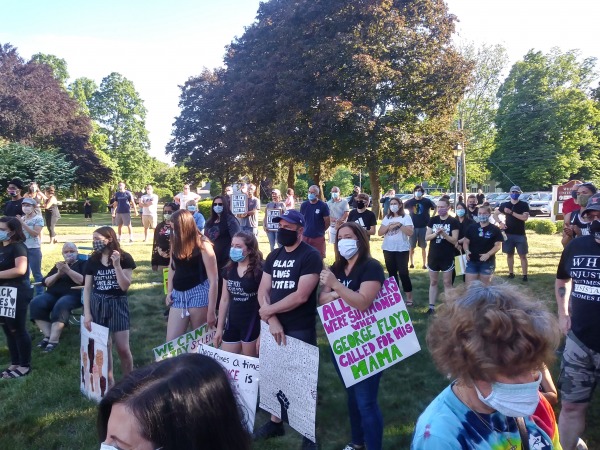 A crowd of Wilbraham residents gather to hear current and former neighbors of color talk about their experiences in the largely White town.
Reminder Publishing photo by Sarah Heinonen

WILBRAHAM – About 150 people, mostly residents of Wilbraham, turned out on the lawn of the Wilbraham United Church on June 17. They were there to listen to their neighbors tell stories from their lives about the hurt and lasting effects of being treated differently because they are people of color.

“This is the time to open your ears, your minds and your hearts,” not to place blame, said organizer Alyssa Toomey.

Toomey, who is biracial, was adopted by a white family in Wilbraham and said that while she loves her hometown, being a person of color in a mostly white town is a “constant struggle.”

Like Toomey, Casey Lu Simon-Plumb was adopted. As someone who came from China and is Jewish, with two moms, Simon-Plumb said she didn't see herself represented in her community and her experiences have led her to feel that while she grew up in Hampden, she's not from Hampden.

Ant Prieto, another former Minnechaug student, also felt as though there was nowhere he fit in. He said that he had been “fairly privileged because of social capital from playing sports,” but still felt unwelcome.

“I was too White for the Black kids and too Black for the White kids,” Prieto said.

Kayla Perry, clad in a “reverse racism isn't real” T-shirt, read the story of a Wilbraham resident who didn't want to speak publically. She explained how being treated differently can have a lasting effect. When the person's older sister began school, a teacher told her mother that she would put the kindergartener in an English as a second language (ESL) class if she spoke Spanish in school. Not wanting her children to be singled out or penalized, Perry said, the mother sacrificed language for education and the author and her sister lost out on growing up bilingual.

Malcolm Gladden recounted a story of being singled out by a teacher who asked him, in front of the class, what it was like to be Black. Gladden pointed out that a White student would never have been asked that question.

“Ever since my first day at Chaug, I knew the meaning of different, because it was me,” Gladden said.

Gladden’s incident with his teacher reflected the microaggressions that other speakers had experienced. Microaggressions, defined by the Oxford Dictionary as “indirect, subtle, or unintentional discrimination against members of a marginalized group such as a racial or ethnic minority,” have a hurtful and “dehumanizing” effect, Toomey said.

“Hampden and Wilbraham seem to specialize in microaggressions,” Perry said.

Ariaun Stewart, a former Minnechaug student, told the story of a friend referring to a boisterous group of students of color as “ghetto,” and followed that by telling Stewart, “but you’re not like that.”

Some of the speakers recounted more overt instances of racism. Stewart said a teacher once read a story aloud in class, using the word n*gger. The teacher then questioned why it is inappropriate for White people to use the word.

“I felt like I was the only one in the room who was going to speak up for my whole race,” Stewart said through tears.

Prieto spoke about how, in the sixth grade, he had transferred to Hampden-Wilbraham Regional School District from Springfield where he had been scheduled to skip a grade. Despite testing into more advanced classes, he was not placed in classes that challenged him. In high school, he again found himself held back from engaging with advanced subject matter when he was told by a teacher that he was not “fit” for an advanced placement course, despite a counselor’s reference. Eventually, he was let into the class and excelled.

“Education does not belong to a race,” Prieto said. “Education is infrastructure. Historically, Black people have had their infrastructure taken from them,” Prieto said, referencing the 1921 Tulsa massacre in which a section of town populated by successful Black businesses and known as “Black Wall Street” was firebombed.

Simbrit Paskins, an educator and activist, read a statement from a Wilbraham native who did not feel comfortable speaking in front of the crowd. She asked the people gathered to think about how many other young people don’t feel comfortable sharing their stories with their own community.

“We as people of color are scared every time we go out the door,” Paskins said.

“When white allies are asking ‘what can I do?’ Just follow our lead,” said Paskins. She said beginning systemic change can include asking school district administrations to develop ways to teach antiracism. “Black lives mattering, that’s the bare minimum,” Paskins said

Stephany Marryshow, another activist, asked White allies to spread allyship and to talk to other White people who won’t necessarily listen to those in the Black community. Marryshow added, “It’s sad when it can be an amazing country for one race. America was never great. We need to make it great for the first time.”

As Marryshow was speaking, two hecklers drove back and forth past the rally, one pickup truck flew a Trump 2020 flag from its bed and the other flew a “thin blue line” flag supporting police. Marryshow called out the second one.

“There are no good cops until good cops keep bad cops from happening,” Marryshow said.

“Holding each other accountable can be done alongside caring about each other,” Simon-Plumb said.

After the scheduled speakers, Toomey opened up the microphone to those in the audience. A woman stepped up to the mic and said that she had been a Wilbraham resident for 35 years.

“My heart cries out for America, this beautiful country,” she said. “Black people are dying every day.”

She also noted the way people of color are slighted in everyday interactions, such as being sat close to the restroom at a restaurant or the way some cashiers will put change on the counter so as to not touch their hand.

“When you see something, say something. Do not tolerate it. We are all God’s children,” she told those gathered.

At the end of the rally, Toomey thanked everyone who came out and admitted she “didn’t know if Wilbraham was ready. But it’'s not about being ready it’s about being human. It’s not enough to not be racist you have to be anti-racist,” Toomey said.

“This makes me so happy and also so sad,” Caruana said. “I’m sad that so little has changed.”

Toomey’s mother, Susan Toomey, was in the crowd supporting her daughter.

“You try to protect your children as best you can. You want to fix things, but you can’t,” she said, adding that it was heartbreaking “to think that [the speakers] never said anything,” about the incidents of racism they experienced, “or did say something and were ignored.”

Teacher Gayle Fogarty said, “Wilbraham is a small town. It doesn’t have to be a small-minded town.”