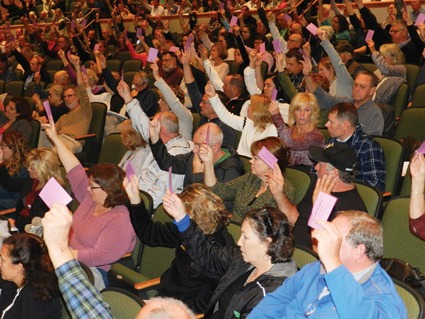 WILBRAHAM – In the midst of Hampden-Wilbraham Regional School District Superintendent Albert Ganem’s presentation to the residents gathered at the town meeting, the Minnechaug Regional High School auditorium’s drop-down screen went blank, and then began ascending back toward the ceiling.

Ganem smiled, looked up at the lighting booth, and said, “You’re killing me here.”

It was a brief moment of levity during a courteous, but tense Special Town Meeting on Oct. 15 at which Ganem’s plan for consolidating eighth grade into Minnechaug for the 2019-20 school year and moving seventh grade to the school in 2022-23 was beaten up, criticized, and ridiculed before being soundly defeated.

If any suspense as to the outcome of the vote remained, it was squelched when Minnechaug Regional High School Principal Stephen Hale stepped to the microphone as the final speaker.

“It’s not very often in your life when you’re faced with an ethical decision of doing what’s right or risking what you’ve built, but I have to stand up here and speak for my family and for the educators and paraprofessionals that I have worked with. I don’t think we’re ready for this plan,” he said, receiving a standing ovation from many in the gallery as he walked away.

During his presentation, Ganem explained the enrollment at the high school level – grades 9 through 12 – was experiencing a steady decline. Relocating eighth grade students to Minnechaug would be the first step in a five-year plan that would eventually lead to the reorganization of Wilbraham’s elementary schools.

Ganem explained the original plan was to make this proposal in the spring of 2019, but the recent settlement between the town of Hampden and its Board of Selectmen, HWRSD, and the Hampden Wilbraham Regional School Committee accelerated the timetable.

Criticism regarding the plan took many forms. Many took issue with the developmental differences – physical, social, and emotional – between high school students and middle school students. Still others questioned whether the high school building had the resources and capacity to house six grade levels. It was also noted that approximately 30 children with special needs currently educated at the high school would be relocated to another building.

Former School Committee Chair Marc Ducey added to those concerns by questioning the educational benefits of such a move and also asserted the district would end up eliminating school choice, which adds approximately $500,000 in revenue to the budget. He also criticized an apparent lack of information regarding the details of the plan.

“A good plan details what needs to be done – when, how, and by who. It often includes best case, expected case, and worst case scenarios. I have yet to see this level of information from the district regarding the plan,” he said. “I really look at it more as a framework, a concept. It’s not a plan.”

Resident Michael Dane called the presentation a “sugar-coated, one-sided version” of the issue “using cherry-picked information,” adding it was representative of a systemic governmental problem in Wilbraham.

Others also commented on the lack of information, stating that the enrollment figures don’t take into consideration factors such as families that might move into town.

School Committee member William Bontempi, speaking in favor of the proposal, which was supported by the committee, said the district was looking at a “complex problem with many intermingled ramifications.”

He asserted that two separate enrollment concerns – a significant drop in enrollment at the high school and an increase in population at the district’s elementary schools – have created the need for a plan such as the one presented. He explained that while educators and parents want smaller class sizes, the district currently does not have room to create more elementary classrooms to reduce the number of students in a class.

“The fact that we would leave this building 33 percent below capacity to me is unconscionable. At the same time, our elementary schools are already bursting … Where do we put the students? What are we going to do?” he said.

In other business, residents voted to approve an article to adopt Sections 6 through 12 of Massachusetts General Law, which would allow the Building Inspector and the town to engage in an expedited process to address nuisance commercial properties.

Residents also approved a zoning change that would allow mixed-use buildings in the Neighborhood Office and Neighborhood Shopping districts located at the center of town. With the new zoning, buildings intended for commercial and residential use, like apartments located over stores and offices, can be constructed with a special permit.

Supporters of the measure indicated it was crucial for the welfare of the community to have a vibrant Main Street corridor and mixed-use developments could revitalize the area. Detractors questioned whether the Planning Board would have the residents’ best interests at heart when considering mixed use projects.

The measure was defeated once before, but Planning Board Chair Jeff Smith said the board supported bringing the proposal forward when it was presented to them as a citizen’s petition because there was strong support and interest in the zoning change the first time and it failed to pass by just 12 votes.