Residents say ‘no’ to setting district for potential DIF project 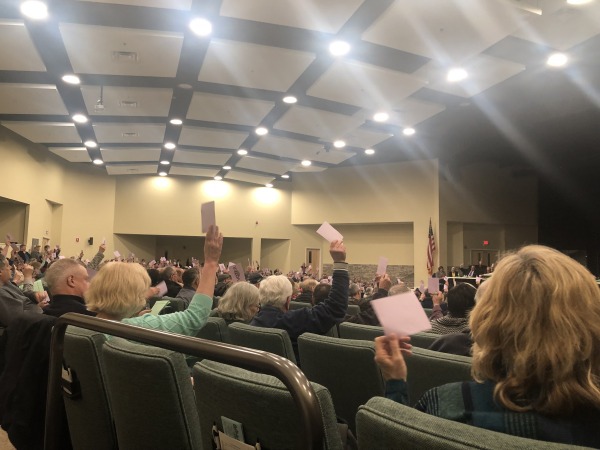 Residents voting for an article at Hampden's May 11 Town Meeting.
Reminder Publishing photo by Payton North.

HAMPDEN – Residents poured into the auditorium space at Bethlehem Church located at 123 Allen St. on May 13 to vote on 24 warrant articles. While some were routine approvals regarding the upcoming FY 2020 budget and authorizing payment of previous bills, others were more contentious articles, including Article 18, District Improvement Financing, which was ultimately not passed at Town Meeting.

When it came time to approve the budget, which was under article two, Co-Chair of the Advisory Committee Carol Fitzgerald shared with the town the work that they had put in on behalf of the town. She explained that the Advisory Committee had met with every department/board in the town to discuss their needs and thoughts on the future. Additionally, Fitzgerald stated that the Town Administrator, Mary McNally, had identified areas that needed to be enhanced. According to Fitzgerald, the town’s stabilization account has a balance of $1,364,296.31. This year’s total budget recommended is $14,103,268. Following some discussion with residents regarding salary increases, article two was passed with a majority vote.

Article six required three votes on three separate items within the article – one vote on the purchase of a parcel of land known as West Brook Phase II, the next the appropriation of funds for the repair and restoration of the Prospect Hill Cemetery fence, and third, to appropriate funds for annual dues to the Community Preservation Coalition.

The West Brook Phase II property, which is 23.45 acres of land owned by Russell and Laura J. Morton, if purchased, would be managed and controlled by the Conservation Commission. The parcel of land extends to Mountain Road. Majority prevailed, and the town approved this portion of the warrant article.

The second Community Preservation article was in response to the Cemetery Commissions request for funds to repair the fencing located at the Prospect Hill Cemetery. A resident questioned why there needed to be a fence at the cemetery, and in a moment of levity, Hampden Moderator Robert Howarth chuckled, “Because people are trying to escape from there.” Another resident exclaimed that he felt that $24,740 was expensive for fencing, to which an additional resident added that he would support the purchase of a steel fence as opposed to cedar because steel would last over time. Though the Advisory Committee recommended favorable action, ultimately the Town voted against this portion of article six.

Finally, the third item to this article was passed by residents, as it was the payment of annual dues to the state for the community preservation committee.

Article 15 consisted of a demolition delay bylaw which would allow for a six-month moratorium on the demolition of a historical structure. The idea behind the article was that the Historical Commission would have the ability to advise owners on options that would preserve or restore the structure instead of demolishing it. The Advisory Committee told residents that they did not advise this article as they thought it was an unnecessary infringement on property owners rights. The majority of residents voted negatively, therefore the article did not pass.

Article 18, if passed, would have set boundary lines for the “Allen Street/Wilbraham Road Improvement District.” Setting a district is the first step to procuring District Improvement Financing from the state which would be used for a proposed water and sewer system.

Founder and CEO of Rediker Software Rich Rediker spoke before the town at Town Meeting and stated, “If you vote for it, it’s not gonna cost anything [right now].” He then explained that at his business which is located in the center of Hampden, they’ve experienced problems with water – and the only water his business uses is to flush the toilets. A resident asked Rediker that if he had more water, would he consider expanding his business. Rediker joked, “Right now, we’re under a water restriction...right now I can only hire people that go to the bathroom once a day rather than two to three times a day.”

Other residents questioned where the water would be coming from, who is going to pay, and whether or not creating a district before knowing where the water would come from was putting the cart before the horse. In favor of the article, some residents cited that they would like to have the opportunity to opt into town sewer, and that by adding numerous fire hydrants this could address safety issues.

At the end of the discussion, residents ultimately voted in opposition of the article, therefore it did not pass.

Article one was in place to hear the annual town reports. The Advisory Committee recommended favorable action, and subsequently, article one passed by a majority vote.

Article Three was in regard to previous bills, and considering there were no previous bills to be paid, there was a vote for no action on this article which passed.

The Enterprise Fund Transfer Station was the topic of article five, which asked the town to fund the recycling and trash programs. At Town Meeting, majority prevailed and the article passed.

Article seven was passed by majority vote, and subsequently appropriated money for the Conservation Fund for purchase of available land for conservation.

Article Nine, which looked to approve funding for a replacement for the towns 1996 Mack Dump Truck with plow and sander, was approved by a two-third majority vote.

Article 10, the highway building addition, was approved by a majority vote.

Article 11 which was in regard to library additional state aid, was approved by the majority of the town.

Articles 12 and 13 which focused on the Assessors’ Stabilization Fund, were both approved by the majority of the town.

Article 14 establishes a Capital Improvement Planning Committee to be appointed by the Board of Selectmen. This vote was done by hand-count of votes as the moderator was unsure regarding the majority. Ultimately, Article 14 had 160 residents against and 124 in favor of the article.

The Firehouse Assessment and Feasibility Study was the topic of Article 16, which by passing the article, the town voted to allocate $40,000 for a review of the building for expansion for future needs.

Police/Fire radio system assessment was the topic of Article 17, which was passed by residents. Hampden Police Chief Jeffrey Farnsworth explained to residents that parts for the police station’s current radio system are being purchased off ebay because they are not being made anymore.

Article 19 was approved by the town, which involved a senior center feasibility study for the expansion of the center. Senior Center Director Becky Moriarty came before the town and explained that they are simply out of space as the population of older adults is on the rise in town. In fact, she stated, the center had to convert their janitors closet to a room to hold programs in an effort to attempt to avoid turning down programs.

Article 20 which involved the Multi-Re-Use-Facility Community Agreement was approved by the town. This article authorized the Board of Selectmen to negotiate a 10-year recycling services contract with a MassDEP approved vendor through a competitive bidding process.

Article 21, which was approved by the town, provided $11,164 for Hampden’s portion of the cost of a school resource officer at Minnechaug Regional High School.

Article 22 added $25,000 to the town’s Reserve Fund, and was approved by the town with a majority vote.

Article 23 appropriated funds to the General Stabilization Fund, and was approved by the town.

Article 24 was recommended to have a no action vote, therefore, majority prevailed and a vote for no action was taken.