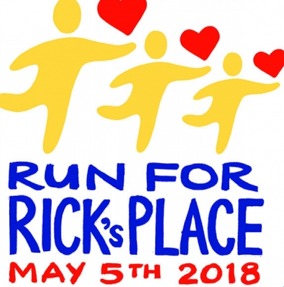 WILBRAHAM –  Since March of 2007 Rick’s Place in Wilbraham has been providing support to grieving children and their families in honor of its namesake Rick Thorpe, who lost his life in the World Trade Center on Sept. 11, 2001.  On March 12, Rick’s Place was presented with a $50,000 check from State Rep. Angelo Puppolo Jr. and State Sen. Eric Lesser, which represents a line item that was passed by the Massachusetts Legislature as part of the FY18 budget.

In FY16 and FY17 Rick’s Place received $25,000 toward programming.  In April of 2017 the group hosted a legislative breakfast with the help of Lesser and Puppolo’s offices.

“Several members of the Western Mass. legislative delegation were in attendance. Some expressed surprise that Rick’s Place had been serving families and schools from their districts for many years,” Rick’s Place Program Director Diane Murray said. “We requested that the amount of our Earmark be increased and Rep. Puppolo, Sen. Lesser and their teams did all of the work on Rick’s Place behalf at the State House.”

In January, Rick’s Place learned that they’d be receiving the funding.  Since then, the groups Board of Directors has approved the hiring of a part-time administrative assistant so their current two part-time administrators are able to spend more time working on school programs and fundraising efforts, according to Murray.

“Our Board and staff were elated to hear that the funds were being released.  All of our services to children and families are free of charge. An earmark of this size gives us the confidence that we’ll be able to serve an increasing number of grieving members of our community,” Murray said.

Currently, Rick’s Place is working on a strategic planning process that is funded by the Community Foundation of Western Massachusetts.

“The timing couldn’t be better as the Rick’s Place Board of Directors intends to spend these Earmark funds in a thoughtful, careful manner to ensure that the greatest numbers of those in need are served.  The goal of the planning project is to create a three-year plan that will enable Rick’s Place to make sustainable growth,” Murray said. “The planning team is looking at the possibility of adding a satellite location to assist families that drive long distances to access our programming.  There’s also a possibility of adding programs such as a camp or early childhood program.”

Puppolo and Lesser offered their sentiments in statements on the great work that Rick’s Place has been doing over the years for the community.

“I’m happy to not only have secured this important funding for Rick’s Place to help fund the great programs they offer, but also to have been able to increase the amount above what was awarded in the previous budget,” stated Puppolo. “Rick’s Place provides invaluable counseling services to children and teens who have lost a loved one as well as to their families. It provides them with a safe place to remember their loved ones and honor their memories while having the support of other children who are experiencing the same loss.”

Lesser said, “Rick’s Place plays such an important role in our community, helping children and families handle grief and loss. With its dedicated staff and volunteers, this organization has had such a profound impact. I’m proud to have worked with Representative Puppolo to secure this important funding for Rick’s Place.”

To learn more about Rick’s Place, go to https://www.ricksplacema.org/.