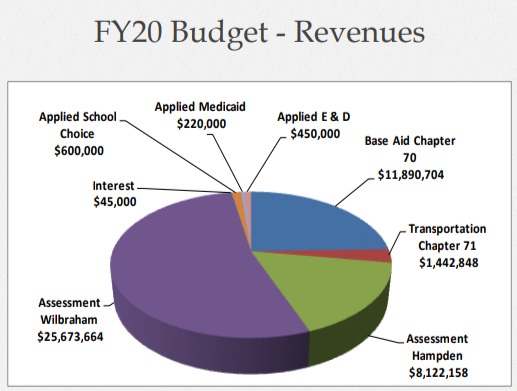 Above shows the budget breakdown for the HWRSD for FY20.
Reminder Publishing submitted photo

WILBRAHAM – The School Committee for the Hampden Wilbraham Regional School District (HWRSD) voted on March 21 to approve the proposed budget of $48,444,374 for Fiscal Year 2020 (FY20). The budget was presented at a public hearing held prior to the vote. The presentation laid out the proposed increases over the previous year’s budget and the breakdown of those costs.    With the proposed FY20 budget at $48,444,374, this is an increase of $956,267, or 2.01 percent, over the Fiscal Year 2019 budget. The town assessment breakdown is such that Hampden is responsible for $8,122,158 and Wilbraham is responsible for $25,673,664.

HWRSD Superintendent Albert Ganem Jr. stressed that no services were being cut, instead, he said, “we’re maintaining and adding.”

During the presentation, Howard Barber, the director of Finance, Operations and Human Resources for the school district, explained that the budget is made up of three parts: Chapter 70 state aid, minimum local contributions, which are determined by the state, and town assessments.

The HWRSD has lost 32 Hampden students, while 23 Wilbraham students have joined the district, leaving student enrollment down by nine students from last year.

Barber addressed the issue of why it “costs more to educate fewer students.” He said that much of the cost was mandated and that mandated cost increased by $1,450,000. Some of those costs are state-mandated, such as, health insurance, retirement costs, and out-of-district placements in which students are educated outside of school district facilities. Other costs are mandated by union contracts and transportation costs.

Additional expenses that were undertaken in the FY20 budget include $120,000 for two math intervention personnel and $100,000 for social-emotional student services.

“It’d be nice to hear more about the expenditures,” said Mary Ellen Glover, of Hampden. “They say they don’t want to get into the weeds with us, but it’s not getting into the weeds. We don’t want to know what books you are buying. We just what to know you're buying books,” and how much is being spent on them, said Glover.

The powerpoint is available for the public to view at the www.hwrsd.org.

“I learned tons and I attended every meeting,” said School Committee member Rita Vail, but lamented that, “I did not have the chance to vote on the budget as a subcommittee person.” Vail said that there hasn’t been a subcommittee meeting for two weeks.

During the first of two public comment periods at the School Committee meeting, the elimination of this year’s February vacation, usually held the week of Feb. 15 through 19, was the overwhelming topic of discussion. Kristen Hickland, a teacher and parent, said there had been a “huge increase in student and staff absences,” since the week of Feb. 11.

“Students are missing valuable instruction,” Hickland said and stated they will “notice it in falling grades.” She mentioned the “noticeable impact on staff and student morale.” Hickland said that the lack of February vacation meant students miss out on college visits while the semester is in session.

“They’re still children, they still need a break to be successful,” said Dr. Melanie Collins, of Connecticut Children's Hospital in Hartford, CT. She said there has been an uptick in student sickness.

Regarding the school calendar Committee member John Derosia said that they are developing a survey for parents and staff. Ganem urged patience as they are still in negotiations in regards to issues, such as professional learning time.

The Committee discussed school choice. Minnechaug Regional High School Principal, Steve Hale had said the goal is to keep non-resident students below 10 percent of the total student population. It is on track to hit 9.97 percent in 2022.

“We take these students in blind,” Kennedy said. “Do the costs exceed what we’re getting in?” he asked. “We have people in our towns we should maybe be spending money on.”

In the second public comment session, Mary Ellen Glover came before the Committee to say she was concerned about the lawsuit between the school district and the town of Hampden being used as an excuse for HWRSD’s problems. She said the School Committee was “treating Hampden in a dismissive manner,” and that, “claiming Hampden is the problem is disingenuous.”

The topic again turned to February vacation and the school calendar.

Carissa Cosimini, a parent, said surveys can be non-factual and wanted to make sure the district was not relying on the survey alone. She also stated, “I think that mentally and physically, students do need a break.” Ganem addressed her concern and said the survey was only one component of their data on the February vacation issue.

Gary Wright, a parent, asked the community for patience. He said where he grew up in the Midwest students only get a single March break rather than a February break and an April break.

“Continuity is king,” Wright later told the Committee, emphasizing the benefit to student learning when their instruction is uninterrupted.

Caitlin Follett,  a science teacher, brought up a point that due to the altered calendar, MCAS and student final exams could have run consecutively if not for snow days. She said 25 percent of high school students would have been testing “for hours on end” for four days, if not for the snow days.

Collins addressed the Committee again. “What kind of review did you do on the best way to organize the schedule for the majority of kids?” Committee member Sherrill Caruana told Collins that she had done research into what type of schedule would be best.

One of the teachers that addressed the committee said that February break gives her time to catch up on correcting assignments.

“It’s a lot of effort to save three days either way,” said Hale.

The Wilbraham Hampden Academic Trust came before the Committee to report on plans for the Peach Blossom Fundraiser and suggested generating support by sending a letter out to residents. The Trust’s gala last fall raised $38,000. They are also working on getting more grant requests from schools.

Kiernan addressed a complaint from the previous School Committee meeting about an open meeting law violation. He said the meeting was posted, but not in two places as usually done. The meeting minutes are being compiled and will be shared.