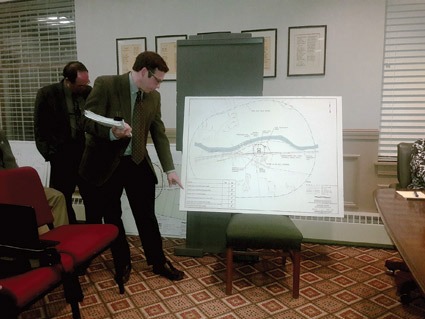 Brian McCormick, of Weston and Sampson, presents plans for changes at the Solid Waste Facility at 120 Boston Road. He appeared before the Select Board April 24. Reminder Publications photo by Dennis Hohenberger

WILBRAHAM – The Board of Selectmen conducted a Public Hearing April 24 on modifying the permit for the Solid Waste Handling Facility at 120 Boston Road. JPZ Inc., the facility owner, sought a change in the materials accepted at the site.

In a prior meeting, the board approved Attorney Ed Pikula as the hearing officer with assistance from Town Counsel Stephen Reilly. The Board of Health scheduled an April 24 hearing.

The transfer station is permitted to accept 645 tons of solid waste and 500 tons of construction and demolition waste and tires per day. Overall, 156,000 ton of waste is accepted annually.

JPZ did not seek a tonnage change but only to accept municipal solid waste and mildly contaminated soil. The site encompasses 23.2 acres.

The Massachusetts Department of Environmental Protection said the site was suitable for the new waste. No other review is required for the project. Jerome J. Gagliarducci, JPZ’s owner, said the project began in early-1990s, which started as a demolition and construction station. In 2002, the facility was leased to Waste Management, who ran the property until 2014.

The latest placed came into being in 2015. He added the facility was operated in the best interest of the town. The only issue was a traffic situation that was corrected. He expects a decline in truck traffic if the board approved the change.

The building would undergo major changes, with a revamped air exchange system. A rail line will expand to the facility. “Everything will be contained in the building,” Gagliarducci.

He said landfills in the region will reach capacity in the next year. Regarding the fewer trucks, he added the vehicles will carry heavier materials.

Brian McCormick, of Weston and Sampson Engineering, reviewed the plans for the site, including the waste transfer building.

The town’s Board of Health must post their recommendation 45 days after the hearing.

John Pearsall, the director of Planning and Development, began preliminary discussions about placing 2451 Boston Road up for auction. He said the town should go before the Board of Appeals and have the existing structure deemed noncompliant.

Several parcels will be put up for sale. Only 12,000 square feet of existing land comprise the property, which limits the building size, Pearsall said.

He proposes an application from the Board of Appeals to demolish the structure that preserves the current zoning, which is zoned general business. A future developer would have a better idea how to build on the property, he said.

The Select Board appeared in agreement with Pearsall’s plan.

In a separate hearing, the board accepted Carla Lane as a public way.

The board approved a liquor license transfer to The Daily Pint. A neighbor who lives next to the pub complained about excessive noise coming from the bar and on-street parking.

Timothy Hanks, who lives adjacent to the pub, said outdoor lighting shines through his bedroom window. He also complained about the overflow parking situation. The parking problem proved the major theme during the hearing.

Selectman Robert J. Boilard said he would like to review police logs related to the pub.

The new owner, Scott Leven, said he plans on being a good neighbor and will abide by local regulations.

The board requested a public safety review of the bar. The state alcohol board must receive the license transfer three days’ post-approval. The board also approved an entertainment license for the establishment.

The Wilbraham Children’s Museum requested a permit to improve accessibility to the complex. Lisa Chapline, the museum’s president, wants the interior and exterior of the building to be accessible for all visitors.

She envisions a single walkway and improved access to a playground on the site. A tree that providing bountiful shade will be cut down. Chapline wants plans drawn up for the changes. She also said the updates to the building be hurricane safe.

She told the board the museum will buy the materials for the project, which was originally estimated at $30,000. Significant savings will be realized by purchasing the building materials, Chapline said.

A proposed picnic area can bring in needed revenue during the summer months. Once approved by the board, she will consult with a designer.

The board’s approval is tied to Chapline meeting with the design consultant. Chapline’s proposal was quickly approved by the board.

The Annual Town Meeting will take place May 15 at Minnechaug High School. The Select Board accepted 61 articles for the meeting.