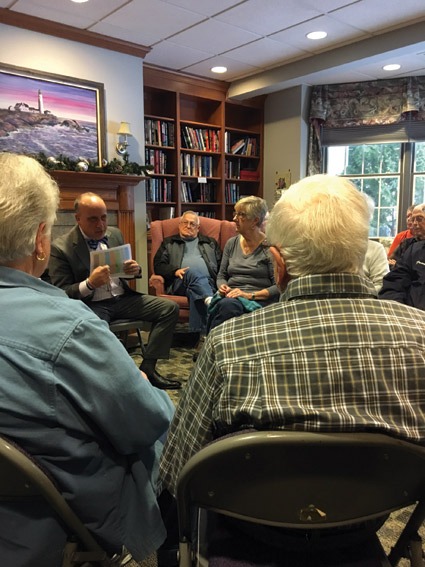 HAMPDEN –  The Hampden Senior Center Library was full on Jan. 12 as they hosted roughly 30 seniors who took time out of their days to meet with Hampden Wilbraham Regional School District (HWRSD) Superintendent Al Ganem.  Ganem invited the seniors of Hampden and a few from Wilbraham to an informal coffee and donuts chat to discuss their ideas, questions, comments and concerns regarding the HWRSD.  This is the second installment of Ganem’s grassroots discussions with citizens in Hampden, with the previous on Dec. 2.

At the start of the meeting Ganem reminded residents that he didn’t come to them with an agenda or a presentation, but instead to talk about the school district as a whole and the schools individually.

“How can you guys help me?  What can we do together to do what’s best for our kids and making sure we do the right thing for them?  That’s why I’m here,” Ganem said.

Hampden Resident Alan Fritz presented what he believes are two crucial facts that are not only Hampden’s concerns, but regionally as well.  He explained that the large majority of Hampden residents would like to see Thornton W. Burgess Middle School (TWB) remain open, as the town has a historical attachment to Thornton W. Burgess, the conservationist and author of children’s stories.  Additionally, he feels that there have not been equal education opportunities across the Hampden and Wilbraham region.

“There is a strong feeling and a lot of evidence that [equal education opportunities] has not happened with our students in Thornton Burgess. They’re not getting the same opportunities to this date and for a number of years as the students in Wilbraham Middle Schools, and that is just not fair,” Fritz said.

Ganem said that this may be the perception, but he doesn’t believe it’s accurate.

“It’s my job to make sure there’s equitable education, I’m hearing it from the town of Wilbraham too where I have large class sizes there.  I have 27 in some of my grade ones, in first grade, and yet at Green Meadows [Elementary School] I have 19 and 20 classrooms.  My job is to make sure I’m looking at the district as a whole to make sure there’s equitable education, not just at the middle school level. I’m hearing the same conversation that has led up to having the large classes in Wilbraham as well too,” Ganem said.

He continued, “At TWB, they’re receiving a really good education.  I have made sure this year that we have a full-time principal there for 100 students. I made sure that we have the staffing that it needs. Everything that educationally is supposed to be happening at that school is happening.  There’s standards that we have to teach, there’s a curriculum that we have to teach to level, we by law in the Department of Education have to make sure that we’re teaching all of those things, we have to, those kids are being assessed, they’re taking the MCAS tests, so everything that is supposed to be happening there is happening.”

Ganem noted that there are certain activities that aren’t happening at TWB that may be happening at Middle Schools in Wilbraham due to the amount of students.

Ganem then listed that the students at TWB have a full-time nurse, an adjustment counselor and a school psychologist as well.

“I’ve actually gone above and beyond.  To have 100 students there, and to pay a full-time Phys. Ed. teacher, because I made sure to have a full-time Phys. Ed. teacher, that’s costing the taxpayers even more money.  I just hired another music teacher that had to be full-time because the other one retired, really she doesn’t have enough kids to be full-time, but I wanted to make sure we have music there. I know people are saying there’s not an equal education there, but I beg to differ.  Do things look a little different? Yeah, they look a little different from TWB to Wilbraham Middle (WMS).  They look a little different from Green Meadows to Stony Hill [Elementary School.] They look different at every school,” Ganem explained.

Fritz questioned why algebra wasn’t being offered at TWB while it is offered at WMS.  Ganem stated this was misinformation, and algebra is offered at TWB, there just simply aren’t enough students for a full, separate algebra classroom at TWB.

When declining enrollment was brought up, resident Beryl Doten interjected, “Why is that?  You took our children.  You took about 40 or 50 of our students over to Wilbraham.  We would have more at Thornton Burgess if that hadn’t happened.  How can you justify 50 sets of parents having extenuating circumstances to transfer to Wilbraham?”

“Help me understand.  If a parent writes a letter to me, and says, “This is what I think is in the best interest of my child, this is what I want for my child or my grandchild,” how do I disagree with that?  They’re the advocates for their child, right? Who am I to say no to those parents?  They think they know what’s best, and they want what’s best for their children,” Ganem replied.

As the meeting continued on Ganem noted that a good deal of the animosity is due to people’s perceptions and it being “the talk around town” as opposed to facts.

Resident Frank Watson made a couple of comments to Ganem, mentioning he knew of a couple of families in Hampden who moved their students to Wilbraham schools and are now selling their Hampden homes to move to Wilbraham.  Watson said he grew up in Springfield, and when he was attending grade school, “nobody gave his parents an option.”  By this he meant that his parents weren’t given choices of which school he could attend, he was simply assigned a school and had to go there.

“I think the selectmen have dropped the ball, and so has the School Committee to try to find a way to make everybody equal,” he continued.

In an effort to come to an agreement and bring the group of seniors together, Pat Gordon of Wilbraham shared her thoughts.

“We no longer can say, ‘oh, you’re from Wilbraham and you’re from Hampden.’  If we think on that district level what is good for the kids, I don’t care what town you’re from, what is good for the district kid?  We’ve got to take politics out of it.  I would like to see reconciliation and resolution to this problem. Give Mr. Ganem power to do what he thinks is best for the district.  When he first proposed the five-year plan, I went through it with a fine tooth comb and for the first time I said, this is a breath of fresh air if you look at it at a district level.  That’s his job,” Gordon said.

Ganem told the group that in the last two months he’s brought in the selectmen from Hampden, Wilbraham and the School Committee together twice.  He said he bought them dinner, and asked them all, “What can we do to get together?”  He said both meetings lasted three hours each, and they worked to come together.

“My job is to get this together and to try to heal it,” he said.

A resident said, “Have you studied the option of that?  Have you looked at the pros and cons?”

Ganem stated no, they haven’t looked into bringing in that large of an amount of school choice students. Additionally, another resident said that the district receives a $5,000 stipend for every school choice student they take in, however it costs more than $5,000 to educate a student for one year.

When residents questioned whether or not there would be a cost to adjust Green Meadows to be functional for the older students, Ganem said there are no predicted costs and they have not allocated any money.  He mentioned removing some furniture and potentially raising some of the bathrooms up for the older students being the only adjustments necessary.

Currently, the cost savings would be at the closure of TWB.  Ganem said the cost of operating TWB at the moment for maintenance is $350,000.

The meeting between the seniors and Ganem lasted an hour and a half, and as the group walked out a resident expressed that she felt there was a breakthrough with the group.

“I know this is not the easiest thing. Know that I’m looking at the community and the district as a whole.  Know that I’m always looking at what I truly believe is the best thing educationally for the kids.  If I didn’t care about your input or your feelings, I wouldn’t have asked for this to happen. I wanted this to take place, to meet with you guys. If I didn’t care I’d be blowing through and plowing ahead, and I can do that, but I want to make sure that I take people on with me, because a good leader takes people on with them, you just don’t lead the charge,” Ganem closed.