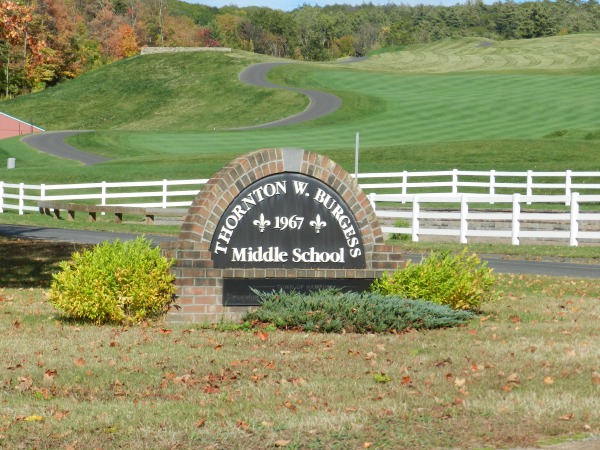 Thornton W. Burgess Middle School (TWB) in Hampden is facing closure following the 2017-2018 school year due to low enrollment and the cost of keeping the building fully-functioning. The school, named after children’s book author and conservationist Thornton Waldo Burgess, was established in 1967 and had its’ 50th year in operation with this school year. A proposed plan suggests the current TWB students combine with Green Meadows Elementary School, creating a kindergarten through eighth grade school for the time being. Reminder Publications photo by Payton North.

HAMPDEN – On Oct. 5 the Hampden Wilbraham Regional School District (HWRSD) School Committee met and presented the towns with their recommended Reorganization Plan.  In this plan, the School Committee divulges that Thornton W. Burgess Middle School (TWB) in Hampden will close following this school year, and in the future, there is a plan to close an additional school in the two towns.

The Reorganization Plan states that it has two overarching goals.  One, to create the optimal learning environment for students and staff, including high quality teaching and learning, as well as maximizing the physical space(s).  Two, to maximize the use of district resources including buildings, staff, services and funds.

The reorganization plan continues on, stating four “important considerations” for the two towns to consider.  It mentions that declining enrollment has had and is continuing to have a negative impact on the HWRSD’s ability to sustain an operating budget to maintain the seven schools.

The plan asks the town to consider New England and local enrollment trends.  According to information provided by the National Center for Education Statistics (NCES), while between fall 2014 and fall 2026, the total public school enrollment in pre-kindergarten through grade 12 is projected to increase by three percent, the increases are not predicted in Massachusetts, or even New England.  NCES states that between fall 2014 and fall 2026, Massachusetts will experience a decrease of four percent in total enrollment, with Rhode Island close behind at a five percent decrease.  Other New England states have a higher percentage of enrollment decreases, with Vermont at a 10 percent decrease, Maine at a 12 percent decrease and Connecticut and New Hampshire both at 14 percent decreases.  Information provided by the School Committee at the meeting suggests that between 2009 and 2016 Hampden’s school-age students has had a decline of 172, and Wilbraham’s has declined by 354.  This means 2009 Hampden’s enrollment has declined by 19.8 percent and Wilbraham’s by 13.4 percent.  Additionally, the New England School Development Council (NESDEC) predicts the average decline for the HWRSD is 41.9 pupils per year.

The plan asks that the town's note the Massachusetts School Building Association (MSBA) feedback, as well as positive feedback from students and families who’ve transferred from Hampden schools to Wilbraham schools in recent years.

“When your child is joining every group and club at school that she can and tells you that this is the happiest she’s ever been at school and that she feels like she’s been with these kids forever, you know you made the right decision.  I work in both Hampden and Wilbraham schools, collected my own information and made my own decision.  While I voted for ALL children to have this experience, I did ultimately make a decision for what would be best for my child,” Nan Jenkinson O’Connor wrote on the 566: Hampden Matters Facebook page.

The plan reminds residents of the original strategic goals: maximizing physical spaces and strategic use of district resources.

Continuing, a “Blueprint for Educational Success” was presented.  The blueprint suggested the towns “capitalize on the Minnechaug experience,” by closing TWB for 2018-2019, creating a kindergarten through eighth grade school at Green Meadows for that school year, and forming a grades eight through 12 Minnechaug Regional High School by school year 2019-2020.

As the years pass, additional changes will be made.  The blueprint proposed a grades seven through 12 high school at Minnechaug by 2022-2023, to coincide with a kindergarten through grade six at Green Meadows.  By 2022-2023, an additional unspecified building in Wilbraham will then close.

The benefits listed for creating a grades seven through 12 Minnechaug are access to more academic offerings, including a seven to eight academy focused on Pathways, which are dual enrollment and advanced placement classes.  Additionally, they’re hoping this will provide more extra curricular offerings with sports, clubs, band and more –not to mention, a cost savings for not having to keep the additional building(s) open.

Keeping the future plans of a grades seven through 12 high school and a kindergarten through grade eight middle school, some residents are not pleased that there will be such a large age gap between students.  One resident said though he’s seen a lot of speculation as to what will happen to TWB post-closure, he hasn’t seen much chatter regarding the students who will be affected by this change.

“While I see much concern about the property, my concern is my son.  All of (our) children must remain number one.  My son is in first grade this year, and I do not find a bus/school with both eighth graders and first graders remotely appropriate,” Patrick Bagley-Bacigalupo commented on the Hampden 01036 Facebook page.

“Having a K-8 [kindergarten through eighth grade] is a joke.  I’m sick to my stomach.  We should have just merged with Wilbraham.  It’s not okay to have kindergarten kids with teenagers!” Carolyn Broderick Armstrong wrote on the 566: Hampden Matters page.

“As a former student at TWB this makes me sad.  As an educator and a parent I find it wildly inappropriate to have seventh and twelfth graders together,” Katie Lanzoni commented.

Calculating together the total savings for closing TWB, there will be a $100,000 savings in utilities, as well as $250,000 in staff and fringe savings.  With the closing of TWB, an administrative assistant, an administrator as well as food services and facilities would be eliminated.

Moving forward, the plan says there are various considerations that will have to be looked at regarding the staffing and schedule of the future Green Meadows,the start time for the Green Meadows kindergarten through eight school, how transportation will be affected, an effort to work with the Massachusetts Department of Elementary and Secondary Education (DESE) to change grade band authorization, projected capital improvements, as well as amending the HWRSD regional agreement.  Additionally, the cost for closing and maintaining TWB will have to be considered.

To look at the plan HWRSD Recommended Reorganization Plan, go to http://www.hwrsd.org/pages/Hampden-Wilbraham_RSD.

HWRSD Superintendent Albert Ganem was unavailable for comment at the time of press.