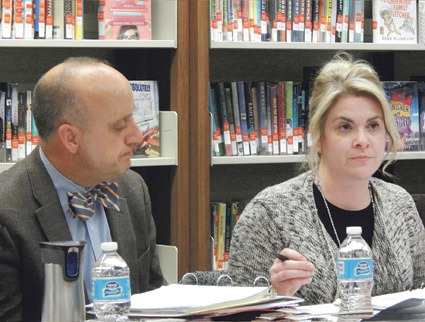 HAMPDEN – School Committee Chair Lisa Morace announced at the School Committee’s Dec. 13 meeting that Thornton W. Burgess (TWB) would remain open for the 2017-2018 school year to dispel rumors that the district was planning to mothball the school.

The Hampden-Wilbraham Regional School District (HWRSD) had proposed amending the regional agreement between the two towns, which would have allowed for a combined middle school in Wilbraham, but Hampden voters overwhelmingly shot down the proposal at its Oct. 24 Special Town Meeting. Wilbraham residents approved the proposal at its own Town Meeting the same night, but the amendment needed a positive vote from residents of both communities to move forward.

“TWB is one of the schools that we have in our fleet,” Morace said. “We currently have a lease with Hampden on the school and we have not changed it at all.”

Prior to the start of the meeting, a small group of Hampden residents stood outside the front entrance of TWB with signs that read, “Keep Hampden’s Middle School Open.”

School Committee member Sean Kennedy said he spoke with the individuals prior to the meeting.

He added he welcomes input from Hampden residents about addressing the district’s ongoing decline in enrollment.

“The only thing that I’ve heard so far is move fourth and fifth [graders to TWB],” Kennedy said. “I’m like, ‘Aren’t we robbing Peter to pay Paul?’”

Although the amendment to the regional agreement wasn’t approved, the district does have the power to allow parents to request transfers from TWB to WMS and vice versa.

Superintendent of Schools Albert Ganem Jr. said thus far 20 parents have requested that their children transfer from TWB to Wilbraham Middle School (WMS). There could be 12 students from Grade 6, four from Grade 7 and four from Grade 8 transferring to WMS next year.

Morace said the regional agreement between Hampden and Wilbraham requires the committee to review every transfer request made by parents.

“We will be doing that individually after Dec. 22 [when requests for transfers will no longer be accepted],” she added. “We have not decided on the date of that meeting where we will discuss that, but we will have to review them.”

Ganem said after the holiday season the district would have a definitive list of transfer requests to review, which would help it formulate plans for staffing levels at TWB in the near future due to the potential drop in students from the transfers and with moving fifth graders to Green Meadows.

The School Committee also adopted its goals for the rest of the year, which include increased transparency, providing equability of education for all students in the district, and engaging in more dialogue with the community.

During the public comment section more than half a dozen Hampden residents shared their thoughts about the middle school unification issue and student transfers.

Resident Lisa Sternburg said she believes the district has not provided educational excellence and equity between Hampden and Wilbraham students while respecting the intent of the regional school agreement.

“The heavy voter turnout in Hampden with the clear rejection of the amendment should have sent a signal to the School Committee that their effort to close TWB was not well received,” she added. “This was not merely a vote against unification, but also against closing TWB. Those that do not understand this have not been paying attention. TWB’s smaller enrollment, relative to Wilbraham Middle School’s, has been used, both in the past and now as the reason that certain courses have not and will not be offered equitably in our middle schools.”

She continued, “What is inexplicable is the administration’s plan to exacerbate this problem with two schemes to further lower TWB’s enrollment. That is A – moving fifth graders out of TWB and down to Green Meadows and B – offering encouragement to parents to transfer their children from TWB to Wilbraham Middle School. This current course of action disrespects the vote and runs roughshod over the people of Hampden and consequently its middle school students. This is a call to reverse course and to find and follow an acceptable and mutually beneficial direction.”

Mary Ellen Glover, a former School Committee chair and member of Citizens Supporting Educational Excellence, a citizens group dedicated to making sure that TWB remains open and that Hampden students receive an equitable education in the district, said she believes the district’s plan to transfer fifth graders from TWB to Green Meadows ignores the wishes of Hampden residents.

“The reality is that fifth graders have been educated at Thornton Burgess with great success for over 20 years,” Glover explained. “If this move was so essential why has it not been done over anytime over all these years?”