Town plans to re-apply for funding to purchase Mt. Marcy 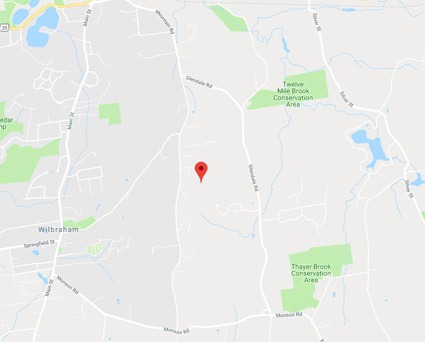 Though Wilbraham applied for funding for the Mt. Marcy property, the town was denied funding for this year due to demographics, abundance of projects and a lack of funding.
Reminder Publications submitted photo.

WILBRAHAM – In a recent Facebook post by Wilbraham Board of Selectmen member Robert Boilard he updated the town on the attempted purchase of Wilbraham’s  Mt. Marcy, revealing the town did not receive funding for the purchase.

The post reads, “The Massachusetts Executive Office of Energy & Environmental Affairs has denied the grant for funding the purchase of Mt. Marcy. So Wilbraham will not receive any funding this year for this project.  Even though the Department did say this was a good project they cited that there is a lack of funding and the applications were all competitive.”

In Nov. of 2015, Minnechaug Land Trust Board of Trustees Vice President Steve Lawson told Reminder Publications that the trust was planning to submit a proposal to use $175,000 of Community Preservation Act (CPA) money to purchase the 47.3-acre parcel of land that is Mt. Marcy.  Lawson also noted the total cost of the land would come to about $400,000, and that the Minnechaug Land Trust planned to apply for a Local Acquisitions for Natural Diversity (LAND) grant through the state which was intended to pay for two-thirds of the total price of Mt. Marcy should they have received the grant.

At the May 2016 Wilbraham Town Meeting voters approved the allocation of $150,000 from CPA funding toward the project.  At the time of Town Meeting, Chair of the Open Space and Recreation Plan Committee Joe Calabrese noted the Mt. Marcy property abuts two town-owned properties, and that the state planned to kick back roughly 62 percent of the town’s investment in the land.

The Mt. Marcy acreage is located on Glendale Rd. in Wilbraham, halfway between Monson Rd. and Boston Rd.  The proposed plan for Mt. Marcy once purchased was to create a parking area for six to eight vehicles, a picnic area and hiking trails for the public to use.

Select Board Chair Robert Russell stated that moving forward the town plans to submit another application for funding for the following year.

“The Town Meetings decision is what matters here, and the town is in favor of it.  The town has already weighed in on this,” Russell said.

Wilbraham did not receive funding for the purchase of Mt. Marcy due to several factors, including the towns demographics.  However, Russell stated this doesn’t mean the town won’t be able to get funding for the project in the future.

“The number of projects [that applied for funding] were many and the money that was available was less.  We missed the [funding] cut off by three or four points.  Scoring is based on demographics, we don’t have control over that, but what we do have control over, we do very well,” Russell commented.

The town hasn’t applied for this type of funding in roughly five years according to Russell, which works in the towns favor toward scoring on whether or not they’re offered future funding.