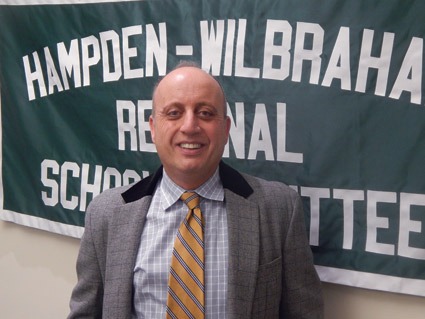 Superintendent of Schools Albert Ganem Jr. stated there would be 48 students transferred from TWB to WMS at the start of the next school year, brining TWB’s student population down to 107 students. More than five times that amount of students would attend WMS next year.
Reminder Publications photo by Chris Goudreau

WILBRAHAM – Forty-eight students at Thornton W. Burgess Middle School (TWB) have been approved by the district to be transferred to Wilbraham Middle School (WMS) at the start of the 2017-2018 school year.

Combined with 50 fifth graders at TWB that are set to be transferred to Green Meadows Elementary School, that total number of students set to be transferred from the school to others in the district amounts to 98, which is 44 percent of TWB’s student population. At the start of the 2017-2018 school year, there would be approximately 107 students at TWB. The student population of WMS is 528 students as of Jan. 17.

Ganem told Reminder Publications the following day after the School Committee’s Jan. 24 meeting, one transfer request had accidently fallen through the cracks prior to the Jan. 10 meeting, but that situation was rectified before the committee reviewed applications at its Jan. 19 executive session meeting.

Although the transfer requests allowed parents the option to move WMS students to TWB, none filed requests for this option, he noted. If a parent or guardian decides they would like to move their child back to TWB, an additional transfer request would have to be made.

Ganem said the district’s job for the following school year is to ensure that TWB students are provided with a high quality education despite the low population.

When asked if teaching staff might be eliminated due to the anticipated drop in students at TWB, Ganem replied, “I’m sure, but we haven’t even looked at that yet. The transfers finally got approval last night. I couldn’t even go forward until all these were approved by the School Committee. So, I’m taking it one step at a time.”

Ganem spoke with Reminder Publications on Jan. 23 as well and addressed a rumor that the district has plans to lower the population in order to mothball TWB beyond the 2017-2018 school year.

He explained he views the district holistically and if TWB’s performance is slipping, that is something he wants to change, not only to help TWB students now, but to make sure those students are ready to move onto Minnechaug Regional High School.

“They all did,” Ganem stated. “All students in Hampden and Wilbraham received the same exact message. Did it go out to a select group? No. It went out to absolutely everyone.”

The second question asked if faculty members at TWB were moved to WMS. “It had to do with their seniority and it had to do also with their certification,” Ganem replied.

When asked if it was suggested that TWB faculty should update their resumes, Ganem stated, “Absolutely not. No way.”

The last question posed to Ganem asked him what he and the School Committee have implemented this year to improve performance at TWB.

“There’s a couple things that we’re doing at TWB,” he noted. “I’ve been spending a lot of time at the schools and in those classrooms … It’s a daily basis. Second of all, we’re really looking closely at the curriculum there. That’s going to be consistent across all schools in our district – not just the middle schools, all schools by grade level.”