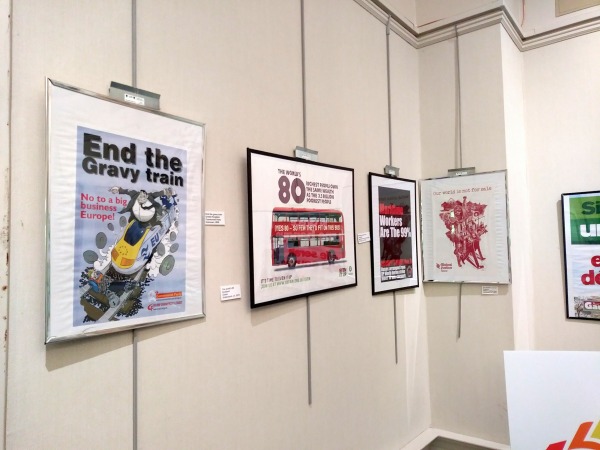 WILBRAHAM – When looking around the Brooks Room at the Wilbraham Public Library this August, patrons may feel the need to confront injustice. Everywhere you look in the room, there are posters encouraging people to fight, march, and stand against economic inequality.

The protest posters are part of “The 99% Resist,” an exhibit created by Stephen Lewis.

Lewis has spent the past 20 years collecting political and labor-related protest posters. His collection stands around 8,600 individual pieces.

Lewis started collecting posters he found at conventions and conferences because they reflected his interests.

“I was a union activist for many years, also just involved in different progressive issues,” Lewis said. He has created exhibits with different themes,  such as “Workers’ Struggles,” “Human Rights,” and “Strike.” Depending on the location of an exhibit, Lewis will curate the display in the interest of staying age-appropriate.

The posters’ origins run the gamut from a 99 percent poster from Jakarta, Indonesia to an anti-capitalist poster from Portugal.
“Corporate greed is universal,” said Lewis. In addition, some date back to the 1970s while others are only a few years old.

The imagery and artistic styles used in the posters are also varied. Many show symbolic art such as pigs and warplanes, while a fist is a near-universal symbol of resistance. Others aim to shock with photos of poverty-stricken children.

While the Wilbraham Library exhibit is focused on economic inequality, there are poster exhibits with different themes in the Palmer and Holyoke libraries. The Palmer exhibit, “Bushwackers and Other Misleaders,” is a satirical poster exhibit about well-known politicians. The exhibit in Holyoke displays Cuban political posters.

Recently, the opportunity to collect posters has dwindled for Lewis.

“A lot of organizations, where in the past they would print hundreds of posters – now they save the image and produce only the posters they need.” Lewis said. “It makes it more of a challenge for me.” He added that organizations are now using social media more than posters.

Lewis stays away from current U.S. politicians. Libraries are publicly funded, he said, and he doesn’t want to use that space to promote a political agenda.

Lewis has a monthly email list of about 3,600 people that details where his exhibits will be. He can be reached at lewisposters@gmail.com. His Facebook page is
facebook.com/Lewisposters.

Hello viewers i want to share a testimony of how DR MACAULAY cured my herpes virus with his herbal medicine,i have been with this disease for the past 2 years i have gone to different hospital for cure all there keep giving me is medication and still am not cured one day i was borrowing through the internet and i saw a lot of people sharing there testimony of how this great herbalist DR MACAULAY has helped them in there various problems and situations i decided to give him a try i contacted this great man all he ask from me was my details which i provided he prepare the herbal medicine and send it to me he also gave me instruction on how to take the herbal medicine i did as i was instructed by him, dear friends you would not believe this, after taking the herbal medicine i went to the hospital for checkup to my greatest surprise my result came out negative, my dear i will say truly there is a cure for herpes virus with the help of DR MACAULAY herbal medicine you can be cured from your herpes virus you can contact him on his email address DR.MACAULAYHERBALHOME@YAHOO.COM if you are having any problem i advice you do contact him for help okay here is his mobile numbers +2348113717132  for help thank you DR MACAULAY for saving my life..........