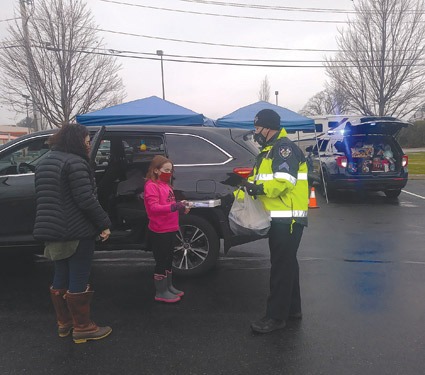 WILBRAHAM – On Dec. 12, the Wilbraham Police Department collected toys to donate to children in need this holiday season. The Stuff-a-Cruiser event ran from 9 a.m. to 1 p.m. at the Wilbraham Big Y and saw a steady stream of community members donate to the cause. On average, the department fills three cruisers and two pickup trucks with toys during the yearly toy drive. Ron Szafir, a manager at Home Depot in Wilbraham brought two carriages with toys to the officers during the event. Lucia Johnstone handed a doll to a police officer. She was at the event with her mother Alexia Johnstone and younger sister Cassidy Johnstone.