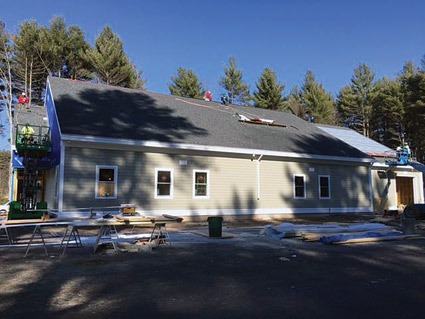 This photo of the police station project was published on the Hampden Police Department’s Facebook page on Feb. 2. The police station’s roof and siding were being installed and work on interior duct work and wiring began.
Reminder Publications submitted photo

HAMPDEN – The $2.95 million police station building project at 100 Allen St. is well underway and would likely be completed in late summer or early fall.

Police Chief Jeff Farnsworth told Reminder Publications a general contractor bid was awarded to Marois Construction, based out of South Hadley, in October 2014 and the contractor began clearing land for the project during the first week of that month.

The new station is being constructed on town-owned land near the Hampden Senior Center.

The project had gone out to bid three times. The second bid came back $100,000 over the project’s budge and both the first and second bids received very few applicants. As a result of the first two bids, the town scrapped ideas to build a modular police station and instead focused on a 6,800-square-foot stick-built design.

Farnsworth said no changes were made to the designs since the bid was awarded.

He added the new police station is “a long time coming” for the 26-member department.

“It’s very nice that the town recognized our need and supported us, and we’ll be moving into a new state-of-the-art facility,” he noted.

The new station would also include a multi-purpose room, interview rooms, and offices for police officers, he noted.

The existing police station is located in town hall – a former school constructed in 1932. During the 1960s, the department moved into the approximately 900-square-foot location at 635 Main St.